Presently available in three colors, Silver, Space Gray, and Gold, the iPhone 8 and the iPhone 8 Plus featured the most durable glass ever in a smartphone in a reinforced steel and aluminum structure that is IP67 water and dust resistant. The stereo speaker setup in the device was updated to be 25 percent louder with deeper bass.

The iPhone 8 includes a 4.7-inch display, while the iPhone 8 Plus features a larger 5.5-inch display. Both displays were upgraded with True Tone support, designed to adapt color temperature and intensity to the ambient light in a room for a more natural, paper-like viewing experience. 3D Touch and P3 wide color support for a greater range of colors continue to be available.

Apple chose glass for the body of the iPhone 8 and the iPhone 8 Plus to enable a Qi-based inductive wireless charging feature, which allows the two devices to be charged when placed atop any Qi-certified inductive charger.

With a second-generation performance controller, all six cores can be harnessed at the same time for much improved speeds when handling multi-threaded workloads. There's an Apple-designed 3-core GPU that's 30 percent faster than the previous-generation GPU, and two of the cores, the Neural Engine, make machine learning tasks faster than ever before. 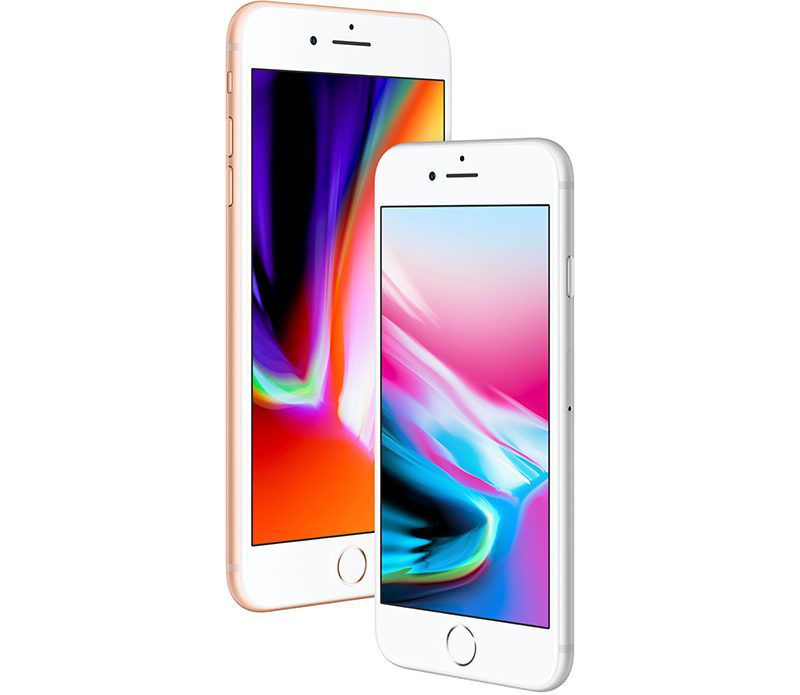 Both the iPhone 8 and the iPhone 8 Plus feature improved cameras with better sensors that let 83 percent more light into the wide-angle camera compared to the previous generation. There's also a upgraded image signal processor built into the A11 that brings better low light performance, including faster autofocus, and there are new pixel processing techniques for sharpness pixel texture.

Apple's Portrait Mode, limited to the iPhone 8 Plus's dual-lens camera system, has been updated with a Portrait Lighting effect to dynamically change the lighting in an image to mimic studio lighting techniques.

With the upgraded image signal processor and an Apple-designed video encoder that enables faster video frame rates and real-time image and motion analysis, video capture on the iPhone 8 and iPhone 8 Plus is better than ever. 4K video at 60 frames per second is supported, as is 1080p slow motion video.

Apple designed the iPhone 8 and the iPhone 8 Plus with augmented reality in mind. The cameras are calibrated for AR, there's an updated gyroscope and accelerometer to enable more accurate motion tracking, and the A11 Bionic offers world tracking and scenes while the GPU renders realistic graphics and the image signal processor offers real-time lighting estimation. iOS 11 introduced hundreds of new AR apps designed using ARKit, all of which can be experienced on iPhone 8 and 8 Plus.

Apple in August 2018 launched a logic board repair program for the iPhone 8, offering free for iPhone 8 models that are affected by an issue that can cause restarts, freezing, and unresponsive devices.

According to Apple, a "very small percentage" of iPhone 8 devices have logic boards with a manufacturing defect that are eligible for a free repair. The repair program applies only to the iPhone 8, not the iPhone 8 Plus or other iPhone models.

Affected customers should check their serial numbers on Apple's website to see if they're eligible for a repair. Customers who have an iPhone 8 impacted by a faulty logic board need to contact Apple support or visit an Apple retail store to get it fixed.